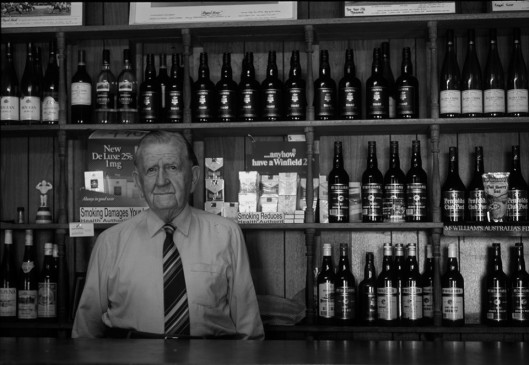 As part of marking Heritage Week 2017 the Gundaroo & District Historical Society is holding a display of photographs at the Gundaroo Colonial Inn focused on Matt Crowe’s Wine Bar and its history. The event also commemorates 20 years since Matt died on 3 May 1997.

The wine bar started out life as the Commercial Hotel in 1872, later becoming known as the Star Wine Saloon after it lost its beer license, and then the Gundaroo Wine Bar (now Gundaroo Colonial Inn). Matt was born in the wine bar and took over when his mother died, running it with his wife Beat and daughter Kaye, until he died.

Beer was restored to the wine bar in 1994 meaning we had a wider choice of drinks other than our usual cider, port or sherry.

The exhibition includes various photographs of the building, Matt, Beat and Kaye, interim managers, events and regulars and also a selection covering the village, sporting teams and other areas of interest.

The exhibition will be officially opened on Saturday 6 May at the Colonial Inn at 2.30pm. The photographs will be on display during normal pub hours for the following week.

For more information send an email to historicalsocietygundaroo@gmail.com