The Gundaroo & District Historical Society’s “Remembering Clemenger” celebration on Saturday 28 April 2018 attracted a good crowd of locals and visitors to witness the unveiling of a plaque on the rejuvenated memorial to the former postmaster and village leader and to visit an exhibition on his life at the Gundaroo Literary Institute.

The day was part of Heritage Week celebrations in the region and marked 100 years since the death of William Ralph Clemenger, one of the popularly titled “Kings of Gundaroo”, and also to acknowledge the role of his wife Ellen (Nellie).

William and Ellen Clemenger on their wedding day 1890

Special guests on the day were his great-granddaughters Heather Faulkner and Margaret Lukian from Kiama who unveiled the plaque and later caught up with other descendants who still live locally, including Robyn Young, formerly of “Willowgrove” on Yass River Road, and Robin Lees of “Black Dam” on Kiaora Lane.

Clem, as he came to be known, was born in Braidwood where his father was the Police Magistrate, and came to Gundaroo in 1882 aged 17 to be the telegraph operator, and shortly after, the postmaster, a position he held until he died in 1918 aged 53.

The President of the Society, Peter Firth, said Clem quickly became a leading light in Gundaroo.

“He was a driving force behind social and cultural events in the village”, Mr Firth said.

“He was a magistrate and a trustee of a number of local institutions. He was a singer and poet, captained the cricket team, coached and played football (rugby union), taught boxing, and owned many successful racehorses including The Palmist, Chiromantist, Warelva and Elvira’s Daughter.

“He was the local correspondent for surrounding newspapers chronicling the day-to-day activities of the village.His columns are an invaluable source of information to the Society in piecing together the history of Gundaroo.”

In  1890 he married local girl Ellen Booth. They had three children, Ralph, Charles and John (Jack). Ralph died in infancy but the other two sons did well. Charles was a champion athlete and a successful businessman. Jack played Davis Cup tennis for Australia and founded the Clemenger advertising company in Melbourne. Following Clemenger’s death she continued to run the Post Office until she moved to Sydney in 1921. She died in 1964.

The Memorial was erected in 1919 using funds raised publicly by Clem’s friend J.F. Heazlett, the publican of the Royal Hotel at the time.  The same day as the Clemenger Memorial was dedicated, Heazlett opened a second public fund to raise money to build the War Memorial, getting 50 pounds that afternoon.

In his welcome on Saturday Mr Firth quoted from the original dedication speech which referred to the Memorial as an “ornament to the town” and a “striking tribute to the memory of a man who character was universally admired and respected”.

“Hopefully this restoration and the events of today will bring Clemenger’s name and achievements back into the public mind and also help rekindle interest in the fascinating history of what is a very special village”, Mr Firth said. 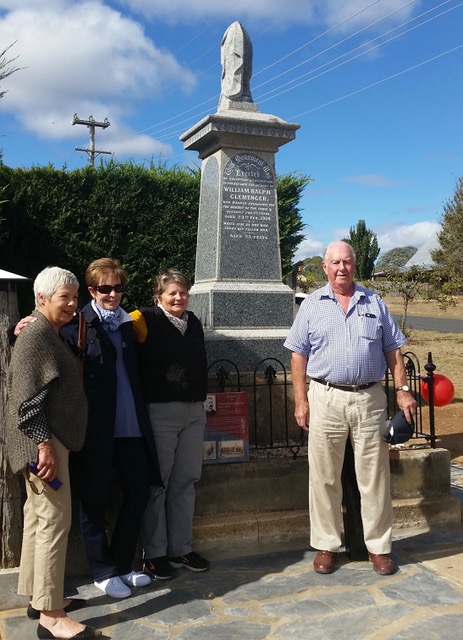 The Clemenger Memorial erected in 1919 from funds raised by public conscription with the original Post Office in the background .